Cast98 is a self-service website that community theatre directors can use to make the transition to an all-digital, automated auditions process. And that's just the beginning. At its core, we made Cast98 as a powerful scheduling tool that automatically syncs cast conflicts with the rehearsal schedule, saving directors and stage managers several hours of tedious spreadsheet data entry.

Cast98 features are divided up into three primary areas:

Actors, directors, stage managers, cast members, auditionees... if you have two eyes and two thumbs, you can create a free account on Cast98.

Having an account for yourself enables you to store all the information that you need on a repeated basis when you go and audition for or work backstage on a show. Your profile includes:

As a show admin (looking at you, directors and stage managers), your individual account gives you access to create and manage a studio and/or shows.

As a performer, your profile saves you the trouble of starting from scratch for every... single... audition.

Studio is the word we use around here to mean any business, non-profit, school, group, theatre, or production company that is putting on a show.

Studios are the bridge between performers and shows. Only someone who is the admin of a studio can post a show, and when a performer logs into Cast98 they see their favorite studios front and center, with a list of any posted upcoming shows.

The individual who initially creates the studio account can invite other users to be studio admins, provided that those users are following the studio.

Some Cast98 features are set at the studio level:

Any studio administrator can post a show on behalf of the studio. Doing so lists the show on Cast98 callboards so that actors can find it. If a performer is following the host studio, they will see the show on their backstage dashboard when they log in.

By default, only these features are visible to the public:

A show administrator can create, edit, and publish these show features for public access:

The online audition form captures info from each auditionee's profile including their contact information, emergency information, past experience, and conflict calendar. It prompts each auditionee to select a time slot and any role preferences, and includes auxiliary space for additional information.

Directors can instruct auditionees to use the Additional Information field as needed to capture more information, and can define audition times for auditionees to choose from. Learn more in the director's guide to auditions.

If the director has already cast their show apart from Cast98, they can invite cast members to fill out the audition form as a formality to capture all their conflicts so that they automatically sync with the rehearsal schedule. Learn more in the FAQs.

To protect the privacy of your cast and production personnel, some features are never publicly accessible. The following features are only visible to the cast and crew of your show by logging into Cast98:

A list of all cast and crew phone numbers and email addresses is automatically generated when you publish your show's cast list, so you'll never have to to compile those by hand again!

Cast members see their name highlighted on the rehearsal schedule and can filter to view only their rehearsals. They can also export any rehearsal to their favorite calendar app. Currently, these apps support exporting rehearsals:

Once the cast list is published, conflicts are automatically captured from each cast member's audition form and imported to the rehearsal schedule. This enables directors to transition immediately from auditions to scheduling, finishing in one night what used to take a week or more!

Here's a visualization that we hope proves handy as you think through your production cycle. 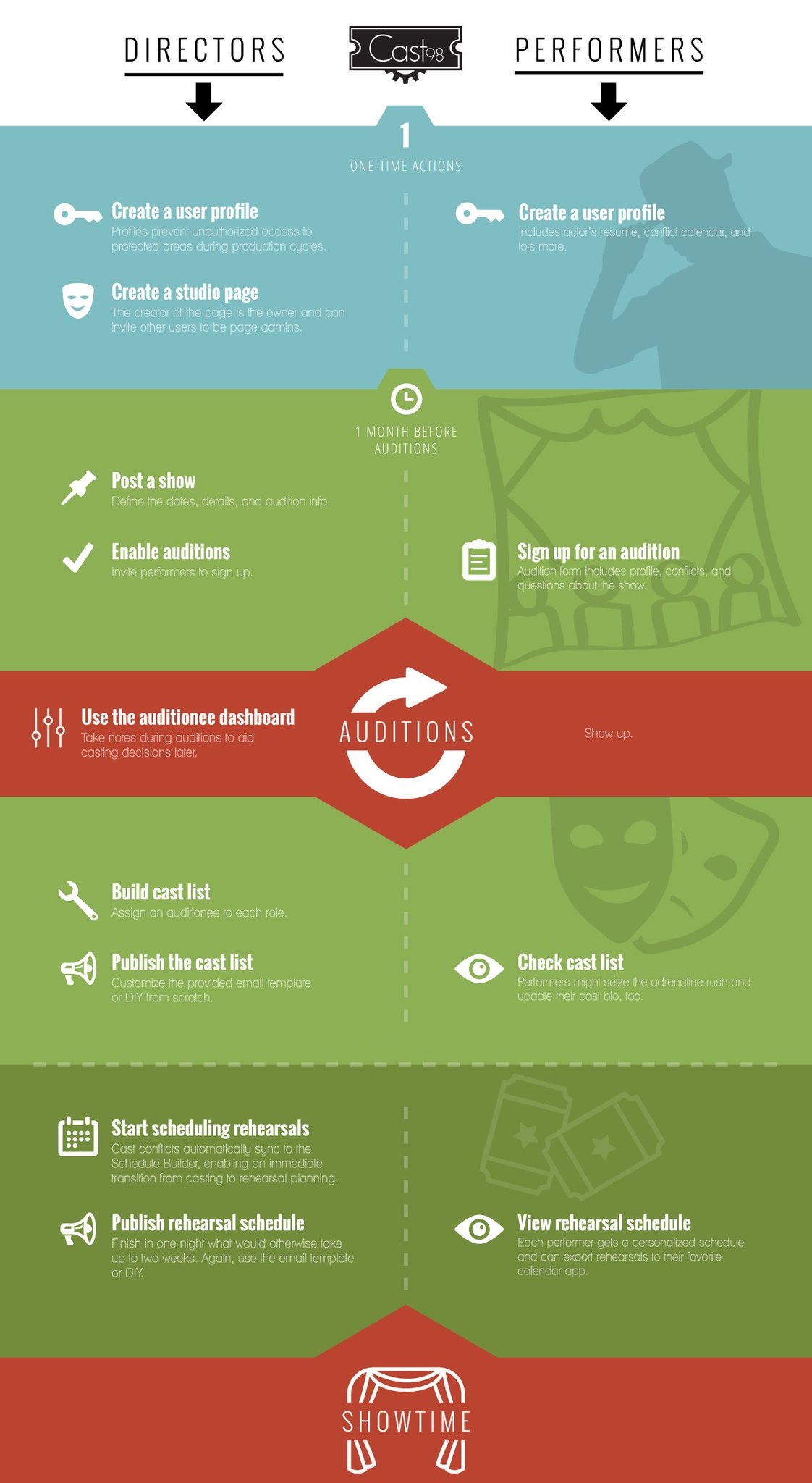 It's recommended you plan ahead a month in advance, but Cast98 enables you to post a show and start auditions same day. Since the audition form is online, auditionees can use their smartphone or laptop when they arrive to submit their information and conflicts.

Directors can use the provided dashboard to see all auditionees at a glance and pull up their profile with a click. Directors can score auditionees in 5 key performance areas and take notes of their thoughts and observations on the fly for easy reference later, during difficult casting decisions.

Directors can immediately transition from auditions to casting, and from casting to scheduling, finishing in one night what used to take a week or more thanks to Cast98's automatic conflict syncing.

Also provided are numerous email starter templates that directors can copy and paste, then edit to their liking and send to announce important milestones. Email templates currently available include: